Free delivery for 2 kits & above.

Have doubts? Book an online consultation

The month of Karkidaka extends from mid-July to mid-August and marks the transition from the hot and humid monsoon to the cooler days of Sarad rtu. The abrupt cooling and humidity brought about by the monsoon after the heat of summer push the Vata to manifest in all its deranged glory. The body is plagued by aches and pains, rigidity, fragility, and weakness; the digestive fire becomes debilitated; the person loses health and vigor.

The systematic consumption of Karkidaka kanji or gruel during this period is a tradition that has stood the test of time. It is basically an easy-to-digest gruel of njavara, enriched with herbs and spices. The kanji is taken as supper or early dinner for a period of 7, 21, or 42 days, as per the convenience of the person. This practice endows the body with excellent immunity and renewed health and vigor.

Karkidaka kanji is a tasty and healthy porridge that is an integral part of ayurvedic cooking and ayurvedic treatment in Kerala during the month of Karkidakam. Consuming Karkidaka kanji after Karkidaka Chikitsa helps to rejuvenate the body and increase energy levels. The benefits of Karkidaka kanji include removal of toxins that may have built up within the body, reduction of fatigue and building of stamina. The Kerala kanji (rice porridge) is an ayurvedic immunity booster and can be consumed by persons of all ages, including pregnant women. The medicinal properties of the kanji helps to lower the bad cholesterol in the body and is also good for persons with diabetes or arthritis.

In olden days, people used to pick out the ingredients (like njavara rice, Ayurvedic herbs, and traditional spices) required for the kanji from their neighbourhood. The Karkidaka Kanjikoottu prepared by Sitaram Ayurveda contains njavara rice and an Oushadakuuttu that cleanses the gut, helps to restore the Vata balance and rejuvenate the body. 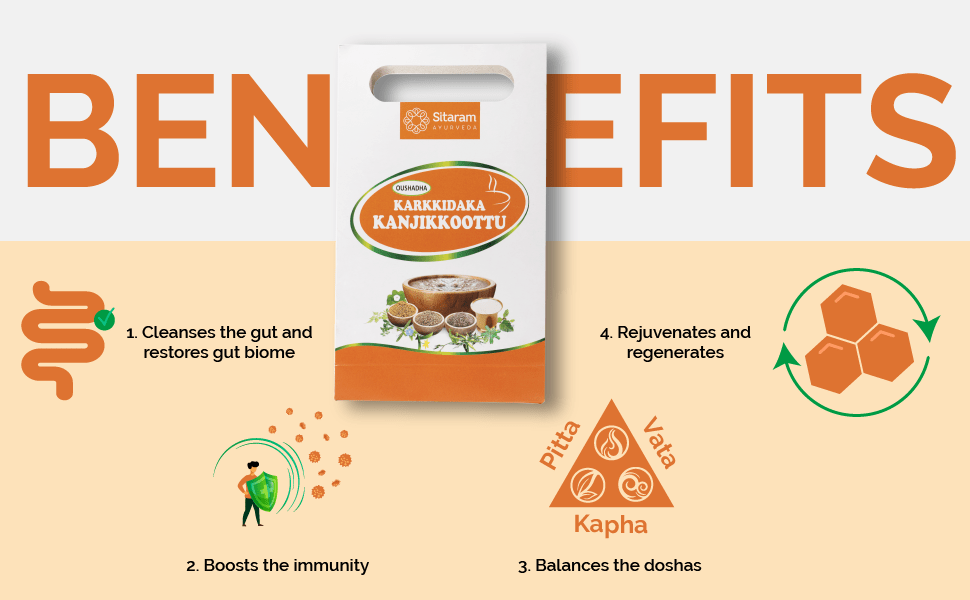 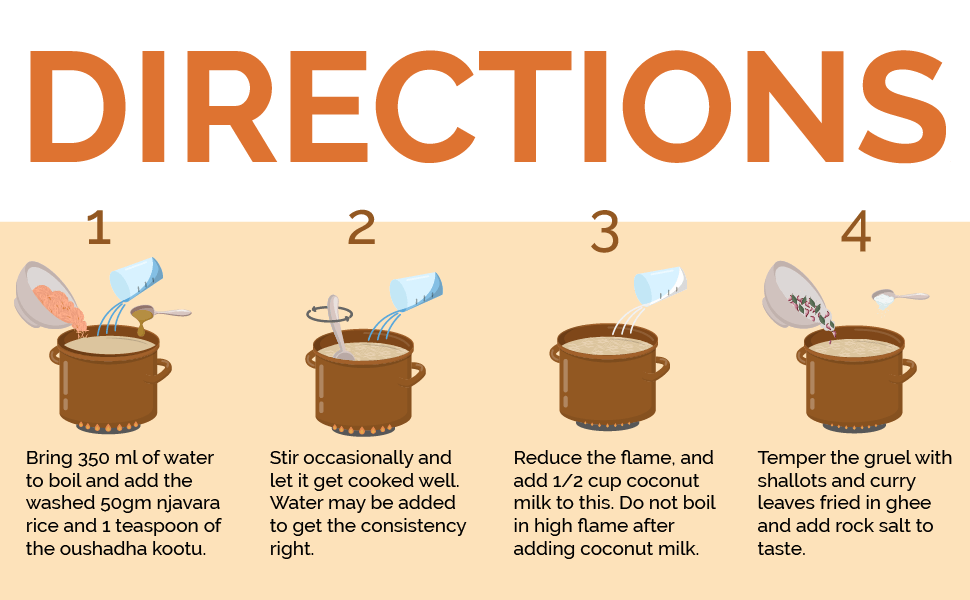 One serving of the ‘kanji’ or gruel is prepared with 50 gms of Njavara rice and a proportionate quantity of Oushadha choorna. It can be substituted for a meal, preferably dinner for best results.

Boil njavara rice with a sufficient quantity of water. When cooked half way, add the oushadha choorna and cook till perfect consistency of ‘kanji’ or gruel is obtained.

Njavara is a different rice variety pertaining to Kerala. Njavara is the indigenous race of rice which exist in 2 forms, black and golden. Of which black coloured njavara rice seems to be more healthier than the golden variety. It is believed to have medicinal properties to rectify the basic ailments affecting the respiratory, circulatory as well as the digestive system. Njavara Kizhi and the Njavara theppu treatments in Ayurveda make use of these nutritious Navara cereals. Powdered Njavara is often mixed with milk and is consumed as porridge. This rice variety is also known for its religious significance, as it is sometimes used in temples for different religious ceremonies. During winter season recipes prepared of Njavara rice is known to have a positive effect on building immunity.

DHNAYAKA(Coriander sativum ) – Fresh leaves and seeds have been integral parts of Indian dietetics. Chopped leaves and powdered coriander are used for garnishing various food items in India. Primarily both of them have a significant effect on the digestive process. Coriander prevents flatulence and controls spasmodic pain as recommended by Ayurveda. Extract of coriander seeds has a marked antispasmodic activity.

Due to its strong flavor, Ginger is an essential ingredient in many Asian cuisines. Its therapeutic benefits have been recorded in Ayurvedic and Traditional Chinese Medicine. Ginger is a potent anti-nauseatic and is beneficial in treating upset stomach.Gingerol and shogaol, active components of Ginger, suppress gastric contractions. Both the fresh and dried rhizomes of Ginger suppress gastric secretion and reduce vomiting. The compounds 6-gingerol and 6-shogaol have a number of pharmacological properties, including antipyretic, analgesic, antitussive and hypotensive properties.

PIPPALI-(Piper longum)Pippali is known as “tridoshic” herb as it suits all body types. Thus regular consumption of pippali in suggested quantity can help you to immune your body to quiet an extent. Pippali has Anti-microbial, Anti-inflammatory activity. Consumption of pippali is said to exhibit anti spasmodic action and hypoglycaemic effect which is believed to lower blood sugar level. It is also reported to be antagonist in respiratory depression. Also due to its cooling post-digestive effect consumption of pippali is considered as a safe and effective option to avoid all sorts of digestive disorders.

LAVANGA(Syzygium aromaticum ) Our experts have successfully proven the activities like Dental analgesic, Carminative, Stimulant, Aromatic, Antiseptic, Appetizer, Digestive, Aphrodisiac, and Antiallergic property of Lavanga. It has been also found out that eugenol extracted from clove oil has antiproliferative action on cancer cells. Cloves also possess antiulcer and purgative action. On topical application, the essential oil extracted from clove relieves pain and promotes wound healing. Gastrointestinal tract diseases can be treated by administering a boiled aqueous extract of Clove.

JATHIPHALA(Myristica fragrance)– according to Ayurveda, it balances the Vatha and Kapha dosha. It is a good digestive, and has properties of removing phlegm. It is also good for the skin.

ELA-(Elettaria cardomum) commonly useds as Elaichi .It has a very good antiibacterial and anfungal properties,It helps in reducing inflammation. Cardamon is often given the epithet ‘queen of spices’ as it is used to flavor food in many countries. In addition, the herb has several health benefits. The German Commission E has indicated the use of Cardamom in dyspepsia and as a cholagogue, which promotes bile discharge from the system. The herb is also helpful in treating gum and teeth infections, throat congestion and kidney disorders

Triphaladi Thailam is used for recurrent cough, cold and flu; chronic allergic rhinitis; hairfall, breakage of hair, balding; dandruff and other scalp disorders; inflammatory diseases and weakness of the eyes, ears and throat.

Nirgundyadi Thailam is used for inflammatory conditions of the head, eyes, ears, nose and throat.

Lakshadi Thailam is used for excessive body heat, weakness and emaciation; inflammatory disorders of gut and bowel in children; anxiety and stress in children; dull and sallow skin and hair.